Hello, my name is Anton Sveshnikov, I’m kayaker from Russia, and I have an offer that might be interesting for you.

The Altai mountains are located in South Siberia. It is the best region in Russia for whitewater kayaking. You’ve probably seen some epic videos about this place. From classic “Glorious way to die” to modern “Book of legends” by Adidas Sickline team; and probably already heard about such iconic brands of Altai as Bashkaus river, Mazhoy Gorge, King of Asia race.

Altai has all you need for perfect kayak trip: wide variety of rivers, ultimate beauty of nature, safe and friendly environment. But this place needs one more thing to become new whitewater Mecca – a proper river guidebook.

Now the Altai Whitewater guidebook is almost ready. A year ago I published it in Russian and this book became very popular in paddling community of our country. Now I’m glad to present an English version of the book, where I share all my experience and knowledge about Altai rivers with kayakers and rafters from all around the world. It is more than just simple translation from Russian; I have rewrote it in order to make the guidebook appropriate for western paddlers’ needs.

Since the whitewater guidebook is quite niche product, it was impossible to find publishing house for it. That’s why I’ve started crowdfunding project. Contribute to this project and you will get perfect tool for travelling to new whitewater Mecca – Altai mountains in Russia.

The link to crowdfunding project: http://unbound.com/books/altai-whitewater-guidebook/
There you can find more information about Altai Whitewater guidebook and about me, the author.

Below you can find the extract from the book – description of famous Mazhoy gorge of Chuya river.

Also you can check map of this section and some photos from there.

Chuya is the right tributary of the Katun, a big, long glacier fed river with two completely different paddling sections. Chuyskiy highway passes along the Chuya river, so logistics are super easy. Aktash village is situated on the junction of the roads that lead you to the most interesting runs of the region. You can find all you need there: supermarket, bank, a few simple guest houses and restaurants, 4×4 and 6×6 vehicles for off-road driving, and finally a helicopter to fly to remote put ins. The true whitewater capital of Altai! 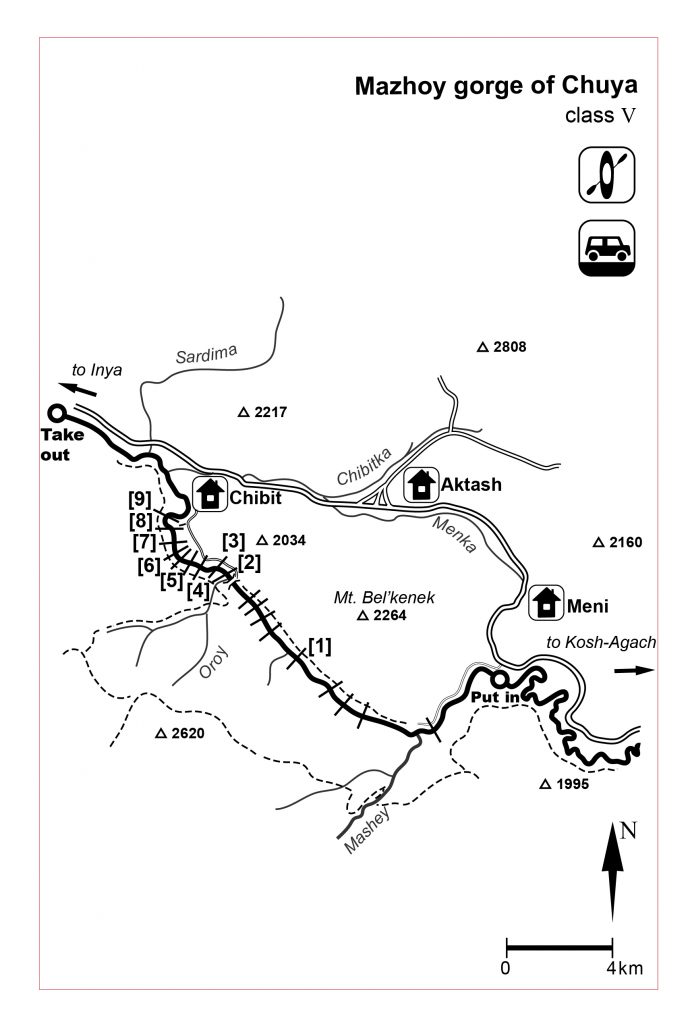 Logistics. Follow Chuyskiy highway through Aktash village. Turn right onto the rough road near the 456th km milestone of the highway and drive to the concrete construction on the banks of the Chuya. This is the put in.

Locals call this place “Polyana Durakov” – Glade of Fools. The story behind the name is that this unfinished concrete structure was supposed to be a big hydro power project in the 1970’s. It was shut down, apparently without reason, half way through its construction, which is inexplicable but great news for paddlers.

The take out is situated at a nice camp site called “Kochevnik” (Nomad). It’s easy to find thanks to a big sign on the Chuyskiy highway, just before Chibit village.

After the put in the Chuya slowly flows through several class II rapids, making it a good place for warming up and preparing for adventures lower down. The real rapids start 200 meters above the left tributary of the Mashey inflow.

The upper Mazhoy is very fast and pushy all the way downstream, with big waves and rare sticky holes. It’s a mostly read-and-run section, but the justly named “Suroviy” (tough)[1] is one rapid that requires scouting. It’s easy to recognise it thanks to the horizon line and left bank of the river (scout from the left bank).

There are only a few flat water sections on the upper Mazhoy. Logs are possible on the islands and banks, so be careful. A rough road passes along the river on the right bank up at 50 – 70 meters height. It is possible in places to climb up with your boat, but not everywhere.
The left tributary of the Oroy and a walking bridge are landmarks for the beginning of the lower Mazhoy – a much more challenging section. If the upper part was too hard for you it is better to call it a day at this point.

Below the bridge the river digs it’s way into the deep box gorge with the complex and dangerous class V rapid “Presidium” [2]. You can’t set up safety from the banks here, but you can scout the first part of the “Presidium” from the rocks on the left bank. There are a few siphons when the water is low. People seldom run this rapid. There’s no shame in portaging “Presidium”, it’s a dangerous stretch. A rough steep road on the right bank starts from the bridge and leads to a plateau. Turn left here to the trail and go down through wild marijuana fields to the river. The portage usually takes about an hour. After it you will find yourself above class V “Razminka” (Warming Up) rapid [3]. This is the starting point of the “King of Asia” race final. You will see the rapid during your portage. You can’t set up safety from the bank here, it’s the same on many other rapids on the lower Mazhoy.

The next two rapids are easy must-runs. A big pool below it and the horizon line are landmarks for the next must-run class V rapid – “Kaskadyor” (Bump Artist) [4]. You can scout the first part of it from the left bank. This first stage of the rapid is full of rocks and lines. The second stage is a box gorge with huge waves and holes. There aren’t a lot of places where you can escape from Mazhoy gorge. The first exit is located after “Kaskadyor” rapid on the right bank. From here you can climb to the road that leads you to the take out.

Below “Kaskadyor” the river calms down slightly. Below two low drops and a right bend you reach a class IV rapid called “Sito” (The Sieve) [5]. Don’t worry – there are no sieves on it, just a couple of huge rocks splitting the river into three channels. The hero line is in the middle with a must-make boof on it. Scouting, setting up safety and portaging (if needed) is possible on the left bank.

100 meters below “Sito” the river bends to the left. The next class IV must-run rapid is “Primanka” (The Bait). Scouting is from the rock on the left bank. Be careful here as the next rapid starts just 50 meters below “Russkie Gorki” (Russian Roller-coaster) [6], class V, is one of the most challenging rapids in the Mazhoy gorge. Scouting, setting up safety and portaging is all on the left bank. If the water level is high the way down could be under water, but still possible. If the water is low in May or the end of August, be aware of a siphon in the first drop of the rapid. 200 meters below “Russkie Gorki” there’s a lake, created in 2014 by a landslide. It also destroyed two perfect rapids but created a new one – “Nedotroga 2.0” (Untouchable 2.0) [7] – gnarly monster rapid from your kayaking nightmares. However, it has been run twice – by a Russian team on bubliks and the Adidas Sickline team with kayaks. Portage on the left bank is short, but tricky. Watch your step!

After the portage there is a 500 meter long pushy section that leads you to the next horizon line – class IV rapid “Malish” (Kid) [8]. Scout and portage on the right bank. Also you can escape from the gorge here. This is the starting point of the “King of Asia” qualifying race. Depending on the water level “Malish” rapid may be a river wide drop with nasty hole in the middle, an enormous wave-hole or a giant wave-train. Sometimes you may suddenly find yourself making mystery moves in your creek boat.

Below “Malish” rapid the river flows through a deep box gorge with read-and-run but pushy rapids. When the gorge becomes a little bit wider you will see one more horizon line – the landmark of the last rapid “Zaisan” [9], class IV. Scouting from the right bank is recommended. After one kilometre of moving water you will reach the take out.

Depending on your skills, mood and water level, choose the right section of Mazhoy gorge for you: only the upper part, only the lower part without “Presidium” rapid, from “Malish” rapid to take out or a total Mazhoy run from beginning to end. If you survive you will want to do it again next day.

Hazards. Swimming is not an option. Safety is extremely hard and even impossible in some places. Mazhoy is changing. Landslides have created some new rapids over the last five years. Logs are also possible. If you are going to run Mazhoy gorge for the first time it is better to ask local kayakers about the current situation. You can find them in “Kochevnik” camping on the take out.