The T-rex is the new creek boat from Italian boat manufacturer Exo kayaks. My first impression of the was that it is pretty big and has a lot of rocker. Definitely a little larger volume wise than the last two boats I owned (Toro and a Tuna). It is also a little rounder than a lot of modern designs, not fully a displacement hull but without any extremely sharp edges. 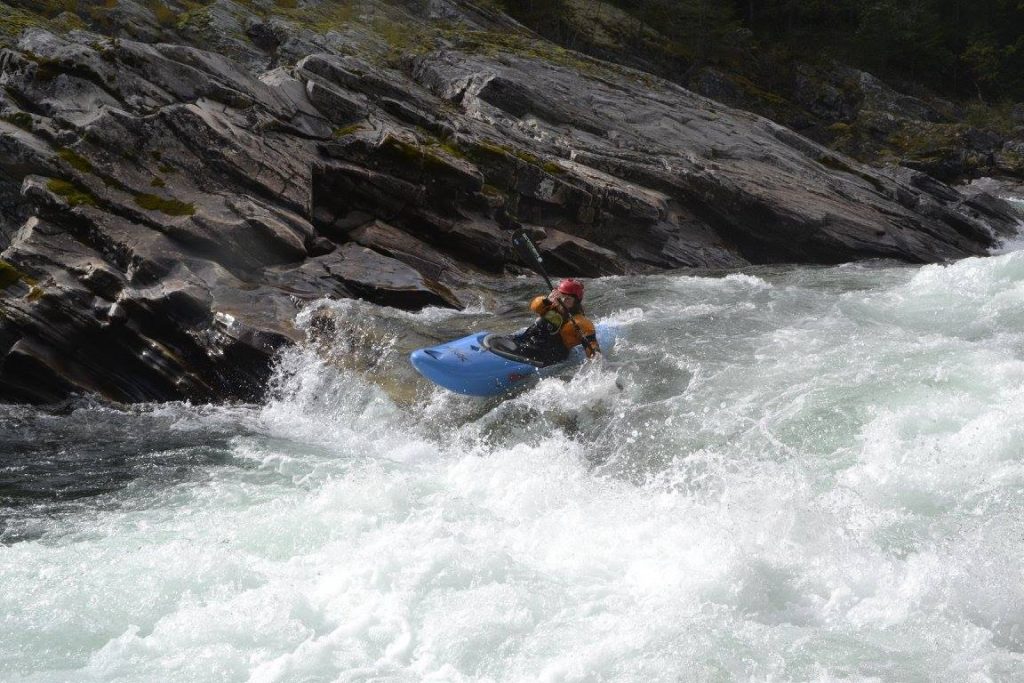 Numbers wise it is 270cm long and 345 litres so a little shorter than a 9r or Toro with a little more volume than both. Weight wise it is surprisingly light for such a big boat coming in at pretty much bang on 21kgs. Myself I am 188cm and around 75kgs. Defiantly towards the lower end of the weight limit but didn’t feel swamped at all.

I have had the boat for a couple of weeks now and taken it out for a fair few runs, mostly on the Sjoa. From the first time jumping in it I have been very impressed with how the T-Rex handles on the water. It felt predictable and stable from the first stroke. Like many modern boats it is very fast in a straight line and has the bow rocker to keep you cruising over the top of everything. 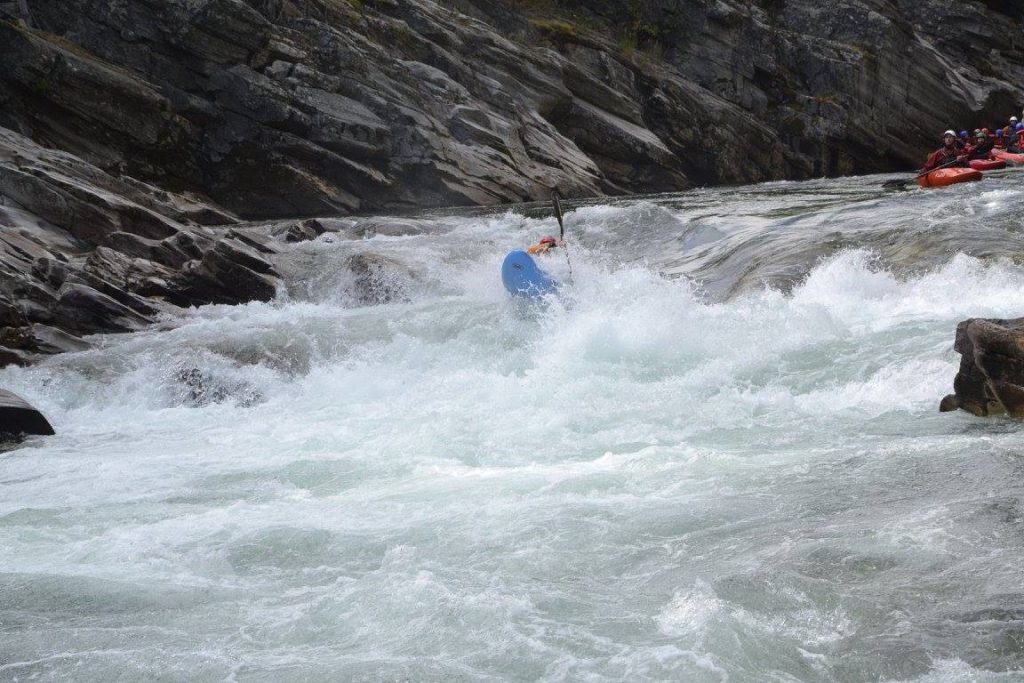 This speed and boofability is definitely a prominent feature of (almost) all modern whitewater kayaks. Boats like the Tuna and 9r are renowned for keeping the bow on top of everything and the T-Rex is just as easy to keep high and dry. It is also incredibly stable and easy to get on edge which I find helps boofing even more. 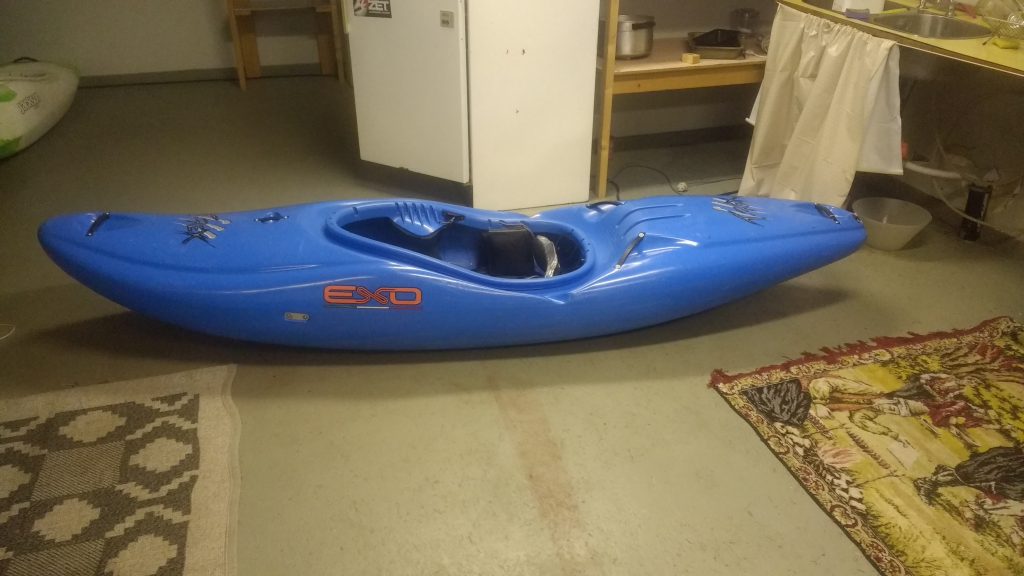 Where the boat really stood out for me was its manoeuvrability. Unlike some modern designs the T-Rex does not need to be driven at full speed in order to perform. This combined with its responsiveness and stability made trying difficult or new lines on my local run incredibly easy. On my first time in the T-Rex I could make moves I have struggled with in my previous boat with ease.

After paddling it a bunch on the Sjoa I got the opportunity to take it out onto a few steeper runs around the area. Once things got pushier I was even more impressed with how it handled.

This manoeuvrability combined with its speed and predictability makes the T-Rex seem like an ideal boat to push your limits on harder white water. While maybe not as playful as some more planning hulled boats I feel it more than makes up for it in its solidity and how well it will look after you. If you want a boat to surf and splat your way down your local class 3 then it is probably not the one but if you want to push your limits few designs I have paddled are as well suited as it is. 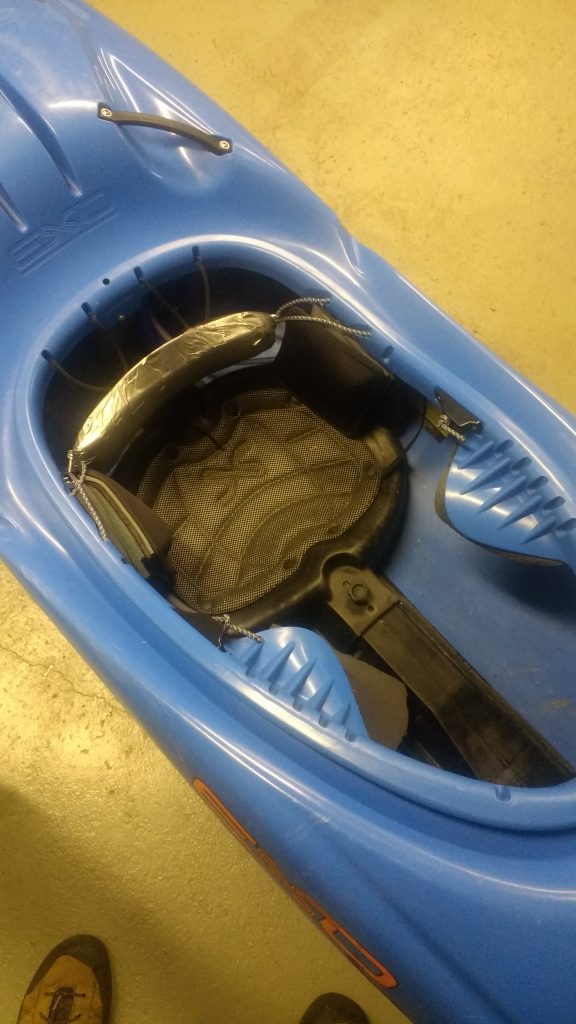 In terms of the quality of the boat itself initial impressions where very good. The construction seems very solid and stiff. In the front it has a solid plastic step out pillar which also doubles as a great carrying handle when shouldering the boat. As well as this it lacks any excess bolt holes around the cockpit rim. I am always a big fan of this as it means less fiddly bolts to try and undo when adjusting, less water inside the boat and less excess bolts to rattle loose on long journeys.

A solid but comfy seat and thigh braces made it pretty good to paddle straight off with only minor adjustments. Hip pads are a simple buckle system and seem easy to get comfy and secure. Later on moving the seat was very simple and easy needing only one allen key.

The backrest is the string and cleat system as also used by Jackson kayak. I have used this system for a while in a playboat before and once used to it had no major complaints. The T-Rex backrest works pretty well and is definitely comfy. However while boofing I broke one of the small metal rings that attaches the string to the actual backrest pretty quickly. This was an easy fix, I just replaced them with d-shackles. Some people will still prefer a ratchet backrest and retrofitting one would not be too challenging if you wanted to.