Risk vs Reward, Skill vs Balls, Attention vs Enjoyment

We all know that one person that doesn’t care about the risk, has the balls and likes the attention, but thankfully there are many paddlers out there that will go out and get the reward purely from the enjoyment of having the skills to paddle something… they don’t need to shout about it. 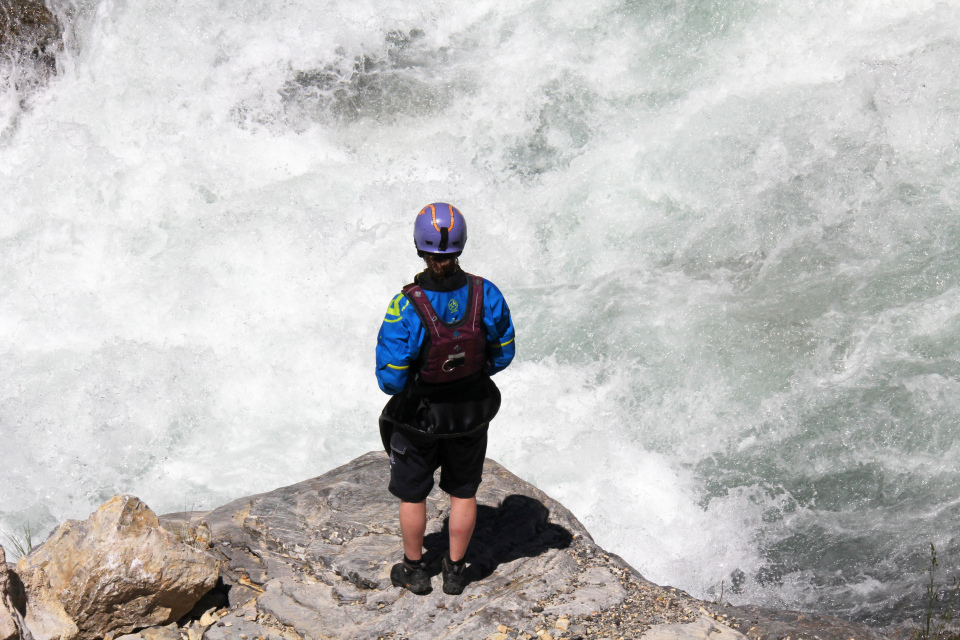 Over the past year I’ve been lucky enough to paddle with some amazing people, in personality and ability, and what I love about this is what I have learnt from them about what is important on and off the river. So many of the situations that I have been in have reinforced what is important to me; my family and friends, and that if I paddle with the right people it doesn’t matter whether you cock up on a river, be it rolling your way down something because you messed up the line, or swimming something that you REALLY messed up the line on. If you choose to paddle with the right people they will support you by either praising you for what you did right, or laughing at you for what you did wrong. Either way they make you see that the glass is in fact half full.

On the other end of the scale I have also seen the opposite side of paddling, those people that make you feel rubbish about messing up, or put a negative spin on whatever you do. I’ve also seen paddlers push themselves on things that I personally do not think they have the mental or physical ability to deal with. Seeing this got me thinking of why they do it, what possesses them to run something with such a great risk to themselves, and to others that would have to sacrifice their own lives to rescue them. We all know that paddling has its risks, we’ve all run rapids that we know will push us and there’s risk of messing up, but how far do we each push that risk. Would you run something knowing that there’s a 50/50 chance of getting it right and that 50% could kill you? I know I wouldn’t. I had a conversation with someone recently about putting a percentage on ability to run a rapid and mine is generally 90/10 at knowing I can get a line, with the 10 being just painful if I mess it up.

The main conclusion that I could see from the risks that some people take are that when you have nothing, you have nothing to lose right?! So what are you actually risking apart from injuries? You don’t have a mortgage to pay so who cares if you’re off work, you don’t have family to look after so no one relies on you; you have no stability in your life so who cares if it becomes unstable for a while right?! What I wonder is if people without responsibilities just don’t need to consider risks as much as those that have.

If you have nothing then does the reward actually outweigh the risk…. If I run that rapid or waterfall that gives me the attention that will take me further in to my kayaking career be it through sponsorship or just popularity is it worth it…to me no, to others it seems yes.

It has become apparent that there are paddlers that risk things because of the reaction and the attention that can be gained from others. Be it friends, other paddlers, or potential sponsors. Yet on the other end of the scale are those paddlers that would rather go and paddle something on the quiet because they want to do it for themselves and couldn’t care less about what response they could potentially get from others. Those are my preferred paddling buddies!

Those that are happy to tell a river story as it actually was, the mistakes that were made, the laughs that were had, not change the details to suit the opinion they want others to have of them.

Don’t get me wrong, we will all take that little extra risk sometimes just for a bit of extra banter over a beer in the evening and I’ll be the first to talk about having a bad day, or messing up a line, because I want nothing to hide, I have no need to prove anything to anyone that needs an unrealistic story to back up my day.

If people are looking up to you and learning from you, they want to know that the goal to be as good as you is not unreachable, because we’re all human and no river day is ever perfect, and if you tell me that it is then I’m likely to disbelieve anything that you will tell me and I don’t want to be like you. These are the types of paddlers that I don’t want to be on the water with, and I do not aspire to be like.

When you are lucky enough to have a great life, amazing friends and family, why would you risk losing all of that? I know I don’t want to, I like my life and my paddling as it is…