The Scottish mountains are old, older than the furthest reaches of comprehension. They do not expend their energies on the frivolities of spires and sharp peaks as their younger brethren do. Instead they simply rise out of the ocean and sit there obstinate, old and awe-inspiring. They are indifferent to your fleeting existence and this is all too clear as one stands in their shadow.

Our last trip to Scotland did not go to plan and was probably best described by the term ‘compound cluster-fuck’. This year we were keen to reduce the expletives used to describe our trip.

We arrived in much the same way as we had before; at night. In the darkness the mountains were shrouded by cloud illuminated only by our headlights and the ominous glow of the fuel light reminding us of the regrettable decision to not stop off in Glasgow. Despite this when the sun rose in the morning we were greeted by a sight I never believed I would see – Blue sky in Scotland. Looking out across the Loch we weighed up our options and decided with such beautiful weather the Etive would probably be the only river running. 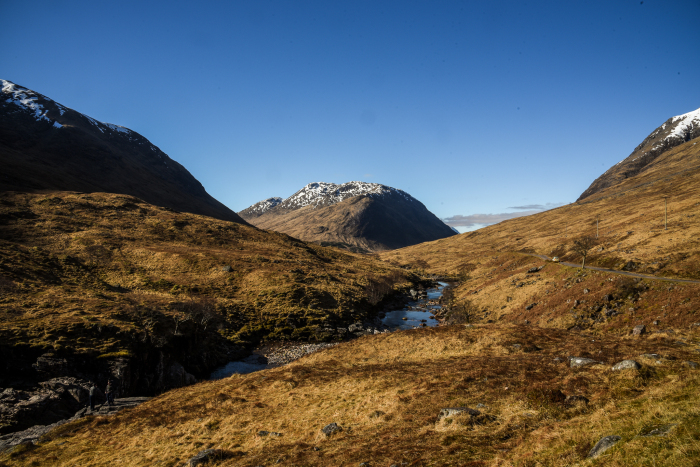 On arrival we were proven correct. We found beautiful alpine blue snow melt water just barely trickling down the iconic triple steps. This was in stark contrast to the previous year where the level rose from ‘actually quite pushy’ to ‘okay this is pretty chunky now’. Dry suited and booted we got on to a much more forgiving river and lapped the three steps several times before they became choked with other boaters who had come to same conclusion on river levels. 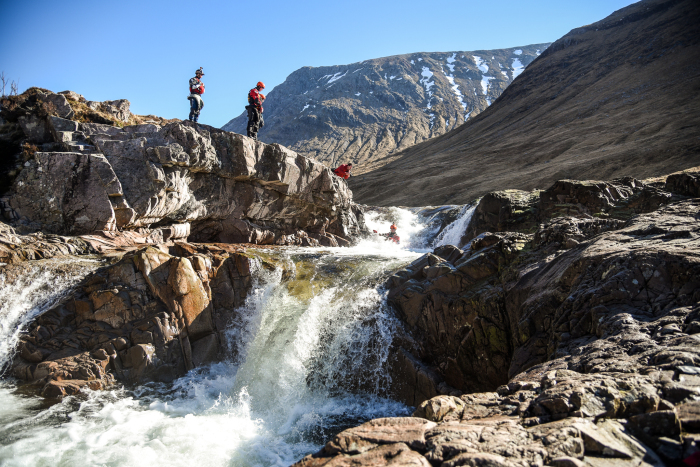 We bunnied down the river, hopping in an out of our boats inspecting each and every drop as if it were the first time we were seeing it, which for majority of our group of 10 it was. Letterbox came and went without incident and I took particular pleasure in stomping the auto-boof off the aptly named Ski jump. The drop which had swallowed and separated me from my boat the previous year. ‘Crack of Doom’ was distinctly less deadly with the water not even lapping at the, would be, siphons. Jonny provided confirmation of this once he rolled up after deciding to perform a closer inspection of the river bed through the latter part of the rapid. Scraping down the flatter sections and a necessary portage around a manky Crack of Dawn was a small ball ache but all of the larger drops provided and we were gifted with pure unadulterated paddling fun in a warm and gloriously sunny Scotland.

Before too long I found myself standing at the top of Right Angle falls. Right Angle is roughly in the region of 20ft and probably the largest drop I have run so far. I am not a great fan of heights, a fact that would later be exposed on a rope bridge. However, for now I kept my fear under wraps or at least did the best to ignore it while I ate my lunch. Tom was the first off. Not necessarily because he was bravest of our bunch but because he did want to take pretty photos of us and who doesn’t love a new cover photo? Tom was shortly followed by Mason, Snape, Adele, Dom, Veasy and Jonny. Somewhere during this onslaught Ant decided that the best way to overcome the fear of staring off top of this this waterfall was to no longer be stood at the top. Consequently he propelled himself off the cliff and disappeared into the torrent of white water below. Not one to be nervous alone, I abandoned my banana on a rock and promptly followed, instantly regretting my decision as the cauldron of water rushed up to greet me.

Upon resurfacing I knew Ant had been right. The cold water had cooled my nerves and I scrambled back up to the top just in time to swap a couple of words with Ant before he departed again. This time in his boat. Alone at the top of the drop I took a couple of moments to myself to evaluate the situation then moved to get my boat. As soon as I picked it up a surreal calm befell me. I was still shit scared but I knew what I was doing. Ratcheted in and deck on I took a shuffle close to the precipice of the seal launch. I practiced in my mind; launch, 1 or 2 paddle stokes to straighten up, off and tuck. Before I could think it threw again I was off and I suddenly found myself at the bottom of what had been until then had been a nightmare. But I had overcome it, I had beaten it. It wasn’t the cleanest of lines, there was clearly room for improvement but I had triumphed over fear and I celebrated loudly at the bottom whooping, wailing and cheering in delight and relief. 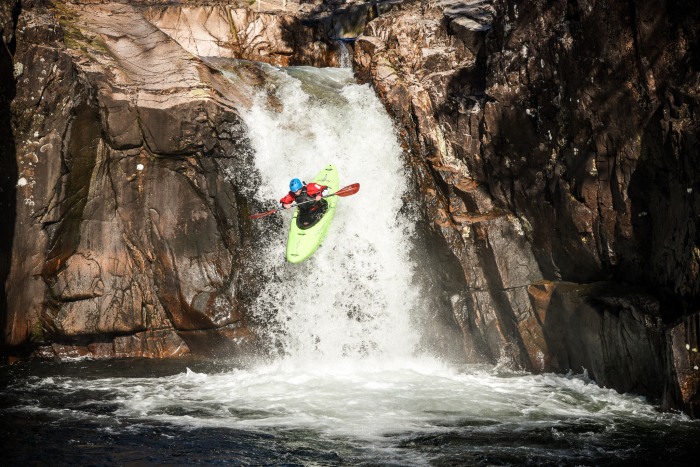 That is until I remembered my banana, still perched, alone at the top of Right Angle. I jumped out of my boat and scrambled back up to the top one last time. My banana was where I had left it, sat atop a rock quietly overlooking the whole affair. Reunited, I triumphantly surveyed out over the scene. Holding my treasured banana aloft like a little lion king I jumped, this time full of confidence, back into the pool of Right Angle.

Of course, the thing that I had overlooked in my celebration was the effect of the hydraulic pressure which, on my immersion, forced the banana out of my hands. I resurfaced just in time to catch a glimpse of my beloved banana being slowly dragged back behind the waterfall to be claimed by the river gods. It would appear it is impossible for me to make a decent of the Etive without making some sort of sacrifice but at least this time my banana had ensured a safe passage. 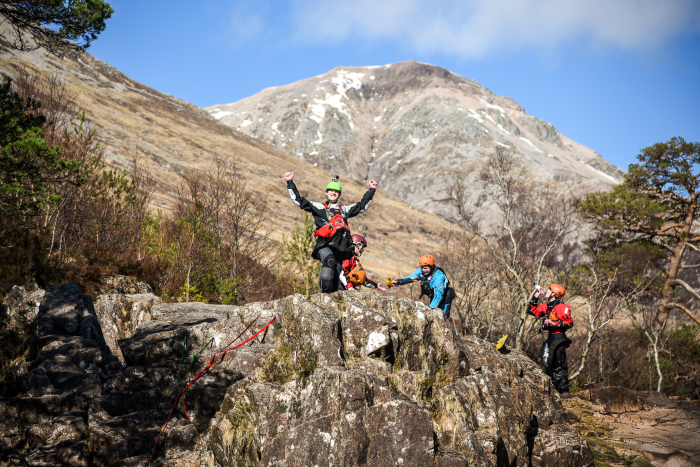 Despite this slightly disappointing end, it had been a great day’s paddling and we exited the gorge laughing about lines, looking forward to car cookies and dinner. Our first day in Scotland had been a successes and we looked on to the rest of our unfinished business.