Jackson Kayak have two new whitewater kayaks being showcased next week at the Outdoor Retailer show, the Nirvana and the Antix. First up is the Nirvana, a race ready 9ft kayak that has much in common with the Zen. 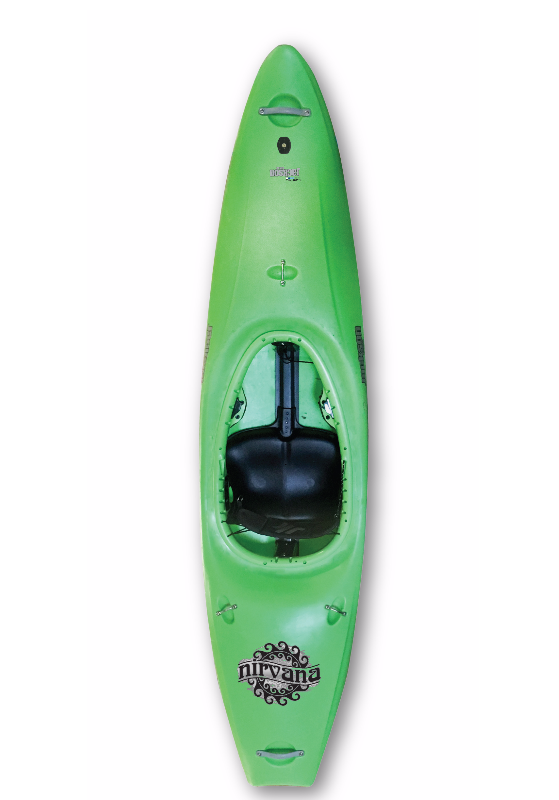 Jackson Kayak’s Nirvana is a fast, race-ready creeking boat designed to move kayakers through rapids quickly and in control. The hull shares much of the Zen’s user-friendliness while the massive amount of rocker keeps the bow dry and clear of holes and waves. Racers will be delighted to paddle such a user-friendly and confidence-inspiring design in the 9-foot category. If you just want a river running/creek boat that has a high-end speed in the rapids but don’t plan on racing, the Nirvana won’t disappoint!

User-friendly hull shape allows racers to focus on their line and going fast versus just trying to keep the boat under control.

Unishock Bulkhead for easy adjustment (get super-tight for a race, or stay loose for a cruise) and for safety.

Rocker profile allows for both a fast boat in pools and easy boofing.

“Providing our team and customers with the best boat options for competing in has been a Jackson Kayak mainstay. The Nirvana assures that creek racers have the boat they need to win while staying true to the Jackson Kayak way of making a high-end competition boat as a great option for the new paddlers as well. We have a lot of excited team members right now that have been counting the days to the release of this boat,” said Eric Jackson, Jackson Kayak President and Kayak Co-Designer with David Knight

The Nirvana will be available at Jackson Kayak dealers in 2017. Manufacturer suggested retail price is $1,249.