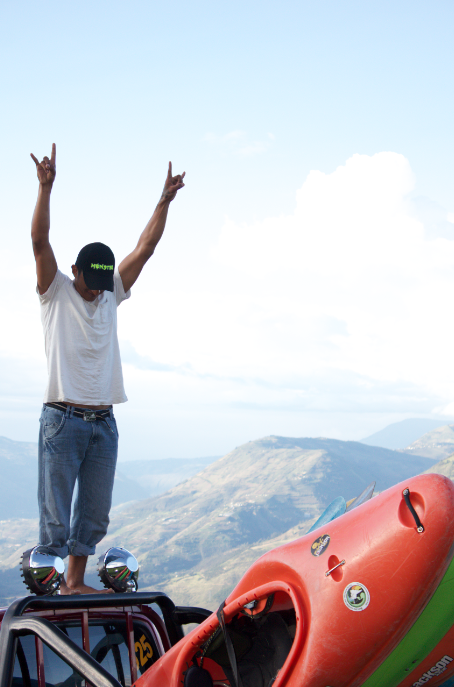 Nath took a chill as he wasnt feeling good, I safety boated the Jatunyacu with Diego and Armin, Armin rocked up without a helmet but cracked on anyway as it was deep. Diego left me with the raft and gear to sort. I wish I had a photo of the put in which was basically a stream bed at 45 degrees, I had to move the 12ft raft down it on my own which was class given the amount of rum I had drunk the night before. I also learnt a valuable lesson, don’t trust a fart in Ecuador, enough said. It rained so hard that all the customers went blue and we had no spare gear, Diego found some matches at the lunch spot and made a fire which was a welcome site for everyone. We headed down and pulled in at a side canyon where everyone got brown war paint or mud.

We relaxed and prepared for hiking into the Upper Upper Jondachi. Nath went to get machetes but all shops were shut, Diego got his friend to open his hardware store for us and he preceded to get 2, 24 inch machetes sharpened and tested them by chopping his pals hair…only in Ecuador.

5 am start, Diego rocked up with Javier his cousin who was driving us, we loaded up our laden kayaks for a day of trekking through jungle. We got to the trib we were planning on running to get down to the Jondachi which is a nice class 4 read and run section called the Urcusiqui, we reached the confluence and kitted our boats up with the carry systems, Diego’s was a ninja nrs pack, Nath couldn’t get his to work and mine was a rats nest of old ratchet straps, Diego and I got ours working but Nath couldn’t so he opted to drag.

The terrain was clear felled grassland for livestock, deep mud and long grass. We yomped up hill and round to another trib to get around some dense jungle. That worked for a while and then it was time to crack the machetes out, Diego aka Mogley from jungle book went ahead and slashed a trail, we cracked on for another hour and found our selves at the top of a stream heading down toward the river. Diego began lowering his boat down by rope we went down and I lowered the other boats down to the boys, abbing down to where they were we realised we could not continue up river so we headed down to the river. The stream opened out to the view of some nice class 4 rapids, we ate some lunch and put on, the level was good we boat scouted the first few rapids and then came across a tasty little rapid which was a boof followed immediately by another with a naughty hole walled in by rocks. We cracked on over a few more rapids, the result was 2 kms of un run whitewater we passed the confluence of the Urcusiqui and headed down the upper Jondachi, the first bridge signalled our takeout, a tasty level on the upper as well as an early start and laden boats meant it was time to leave.

Diego insisted on getting some locals to carry our boats on what was an epic walkout, we layed down on the bridge to wait for some people to pass and as we did the heavens opened, we cracked the tarp out and got underneath it, all 3 of us falling asleep in minutes. The porters arrived and legged it up the bank with the 30 kg ferries we were paddling, one young lad was struggling so I gave him a hand promptly falling over and slowing him down even more. Havier came and got us and we rocked back to tena after a good day. 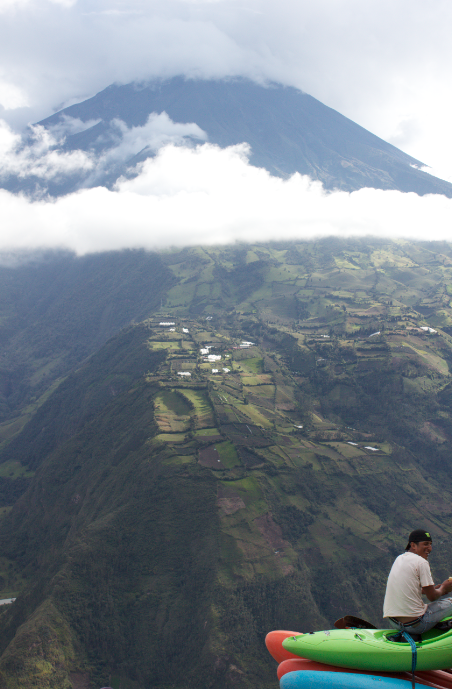 Was a day off, we were feeling the heat and time in the boat to.

We headed to Baeza which is a little higher, steeper and colder, with Javier driving and Diego, we hit the Oyachachi which was a good medium class 4 run, I was behind on one of the last sections, missed where the boys had gone and preceded to boof into a large pourover hole which was holding pretty well, after two powerflips and a bit of side surfing I managed to get out, Nath had made a b-line for the bank, his words were “I didn’t think you had a chance of getting out of there in your boat” and I said “neither did I”. We headed back to le casa de rodrigo which is where most boaters stay, Rodrigo is cool fella who cracked his moonshine out quickly after we got settled. We also realised that despite being told to take cash to Baeza we hadn’t and the nearest ATM was either Quito or Tena (2 hours) where we had just come from, we made a deal witth Gina who owns the restaurant next door and she let us rack up a tab which was potentially a little dangerous.

Levels were high and Armin rocked up from Tena so we hit the Papallacta hot springs which was a good our hour on bus watching fast and furius 5 which was a highlight for me. The springs were class, lots of different temperatures from smoking hot to just alright, after a good soak and some people watching 😉 we rocked back and grabbed some pizza. 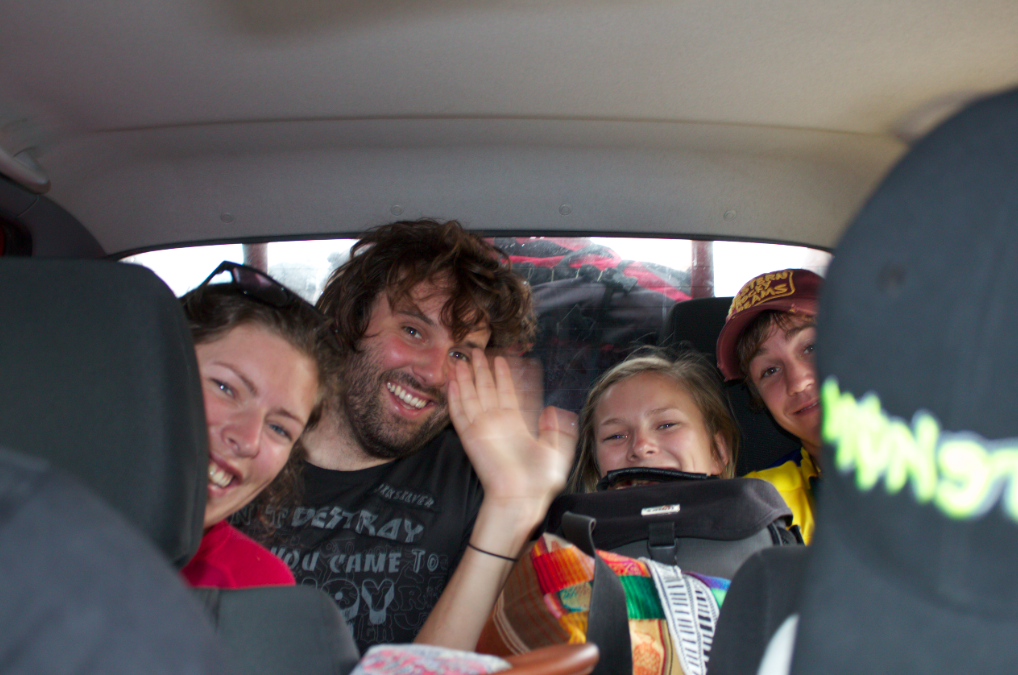 We were introduced to a fella called Andreas from Tena who was up for boating so we headed for the upper Cosanga, with plenty of nice rapids and one pretty tasty undercut to avoid we got to the take out. Without time to do the lower we jumped out and got a ride back to Rodrigios place. We loaded Armin onto the bus and he headed back to Tena after a good couple of days. That night was supposed to be chilled out no booze ready for the papallacta. The Italian and spanish guys, Dario, Enecho, Pablo and Andrea had other ideas, 4 bottles of wine and the bar owner rocked up with his riduclously sized bottle of moonshine and one shot glass, it did the rounds, after 4 shots me and Nath literally ran away to bed. We found out the next day that the moonshine session finished at 3am…

Diego rocked up in the truck with a guy called Kim from Chicago. The aim was to run the Papallacta which was at low levels a hard run. We headed to the put in on arrival it was a pushy medium-high level and going up, Diego said it would be solid class 5 for 3 hours with no margin for error. We decided against it and headed to the lower Cosanga which was a nice class 4 run with some class boofs, big holes and awesome scenary. Kim held the record for rolling and being surfed but his playboating skills got him out each time. Rodrigo picked us up and we thanked him for looking after us so well with his moonshine…We headed for Quito, met Maria, Diegos cousin and she lead us to the Hostel in Quito which was a mission to find. So we were four in Quito up for a bit of partying, we grabbed a burger and hit the bar which had a happy hour, after 10 mojitos and loads of foosball, we moved on bumping into the italian and spanish boys in the street, it was all downhill from there, Javier turned up from the coast as well so we had a good night.

Nath woke everyone up at 7am even tho we had nothing to do, The boys headed off and we started sorting gear. Diego was going straight to the put in of the Pusuno which begins with a large fall. Breakfast and blogging and beginning to gear up for reality on wednesday, bad times.

If you ever find yourselves in Baeza Rodrigo´s Hostel is a must he is a super cool guy, knows the put-ins, take-outs and speaks good English. You must try his moonshine also 🙂 you can find him @ rodrigobaeza1@yahoo.com