Paddling in Ecuador – Part I

Nathan Butler is currently out in Ecuador kayaking and living the Dream. He has kindly agreed to allow his posts from his blog Aquapilot to be also posted on Unsponsored.

The past two days of traveling have been interesing. From making one bag out of two by getting our paddlebag and checked baggage wrapped together in plastic packaging saving £160, to John choaking on his own drewl whilst asleep on the plane. A special point of interest was my little interrogation spell in NYC homeland security, but 35 hours later we have finally made it to Ecuador. We checked into a hostal in the capital city Quito.

The hostal was cool but right next to a nightclub and at 01:00 it was in full swing. After a good nights sleep (the nightclub and it’s attendees had no chance of keeping us awake) we arranged for a taxi to pick us up, with our kayaks and take us to Tena. After the best 5 hour drive ever, communicating with our driver Wilo with only a translation book we arrived in Tena. The place is an amazing little town, full of character and jungle creatures!

Levels are good at present and there is plenty of grade A jungle boulder garden whitewater to have a go at. The plan is to hit the bar to make some friends that will, hopefully, take a couple of British rednecks boating. 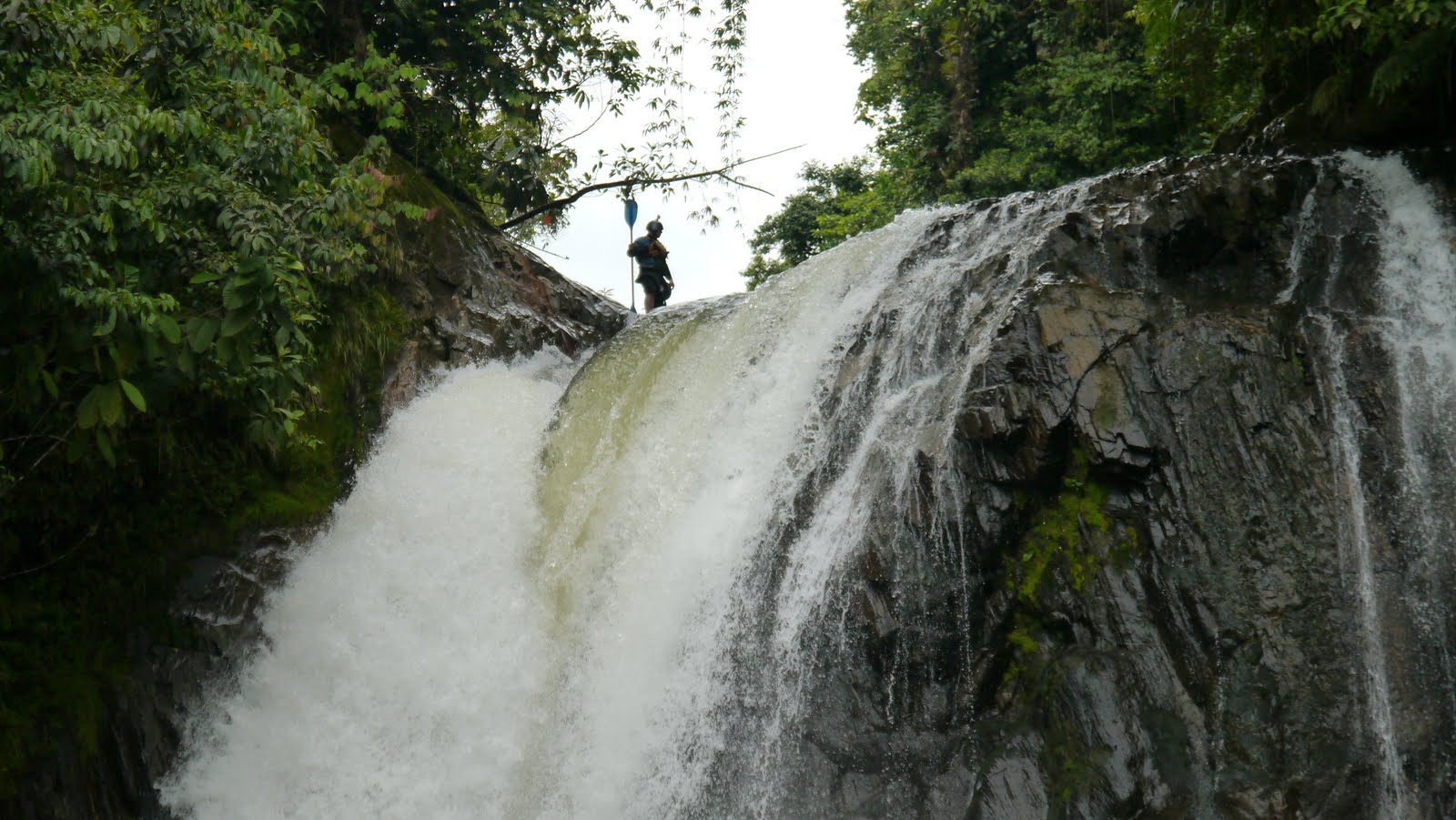 The series of events, that started that night in the bar to 24 hours later exceeded what John and I thought we were capable of, the brakedown:

John and I get to the cobar in Tena. Soon make some kayaking friends Abbie, Diago, Abe and Riley. We spent the next two hours drinking club beer and taking advice off these guys as to what to do tomorrow. We had narrowed it down to three rivers; the Rio Jondachi, the Hollin and the Misahualli. These three sections all fed into eachother to make a long two day trip with a 2 hour portage. we decided to head for the lower Jondachi and left the bar to get some much needed sleep..

We rang our driver Fabian and by 10:00 we we’re at the put-in. Fabian left saying he will meet us at the road bridge at Santo Domingo in 5 hours (15:00) and whatever happens DON’T MISS THE ROAD BRIDGE! Missing the road bridge meant we were committed to two days of class 4 read and run big water with a two hour portage. We arranded for porters to carry our boats 30 minuetes through jungle trails to the river, very small and very fit porters (we nearly lost them!). 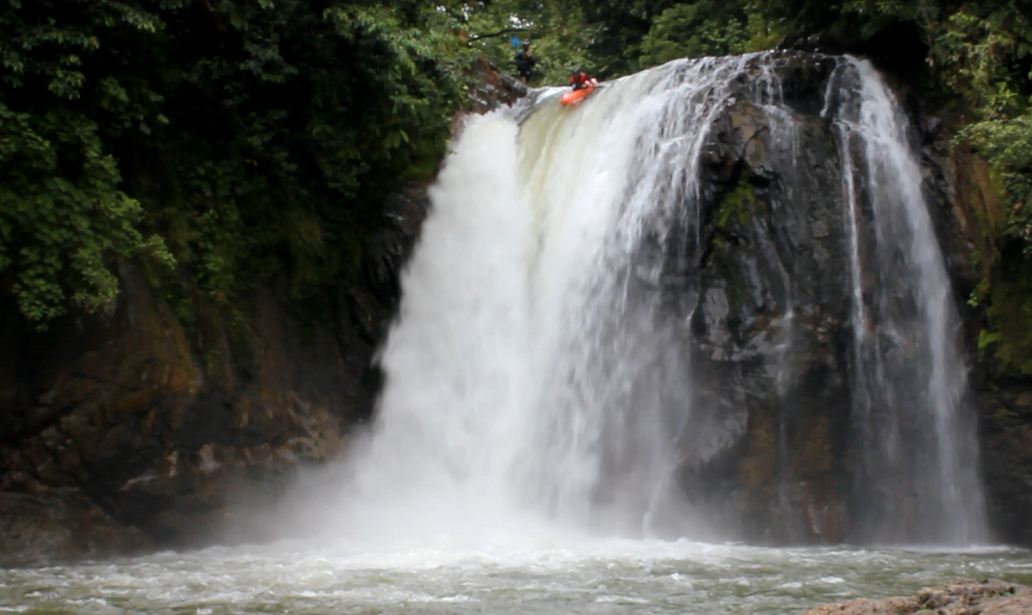 10:30 – we begin, the river was a cristal clear boulder stewen creeky run, sewing it’s was through thick, remote jungle. This was awesome! we paddled this section for snout am hour before it met and turned into the Hollin.
12:30 passed a road bridge. Nathan “this isn’t it John it can’t be, it’s way to early” John “yeah there’s no way Fabian said 5 hours” nathan “let’s trap on”

15:00 – we reach the portage! We knew we’d come to far for sure then. We spent the next 10 minuetes close to tears at the thought of spending the night in the jungle with minum kit. We rang Abbie from one of the rafting centres and left her a message telling her to tell the driver to go as we were going to spend the night in the jungle.

15:15 – we started the portage. We found a quick route and did it in 45 minuets. Then it started to rain, heavy! All we could see was big waves and holes, this was the land of the giants section of the river. We were scared being so remote, tired and cold.

16:00 – we started to paddle, we got our heads down and went for it. Paddling hard for 1 hour brought us around a corner to face a big road bridge. We felt an unbeliveable feeling of relief as we approached the small town of Misahulli about 5 miuetes down stream. We weren’t spending a night in the jungle.

20:00 – Thursday, 24 hours later we are back in the bar. Epic times in the jungle, two long days in one! Not recomended, lesson learnt!

The next day we took a trip down the local run upper Tena into the town, walking our boats back to the hostal was pretty cool.
That night we arranged with Diago to meet us at 9 for a run down the upper Jondachi! This is concidered as a test piece in the area with continuious class 4 and 5. It was a medium flow so we decided to run the Uccu Succi, a tributary to the Upper Jondachi, on the first drop of the river I snapped my paddle on landing and swam into a pool great start! This was considered a fun warm up to the 5 hour trip! We hooked the Werner player splits together an ran the rest of the river, tired but smooth, this run is proberbly my favorite run of all time! A great, hard, smooth, continuious run.

After a drunk newyears eve and a chill out newyears day we decided to run the Piatua a class 3/4 run not in the guidebook with a bar at the take-out! A great day on the water for sure! 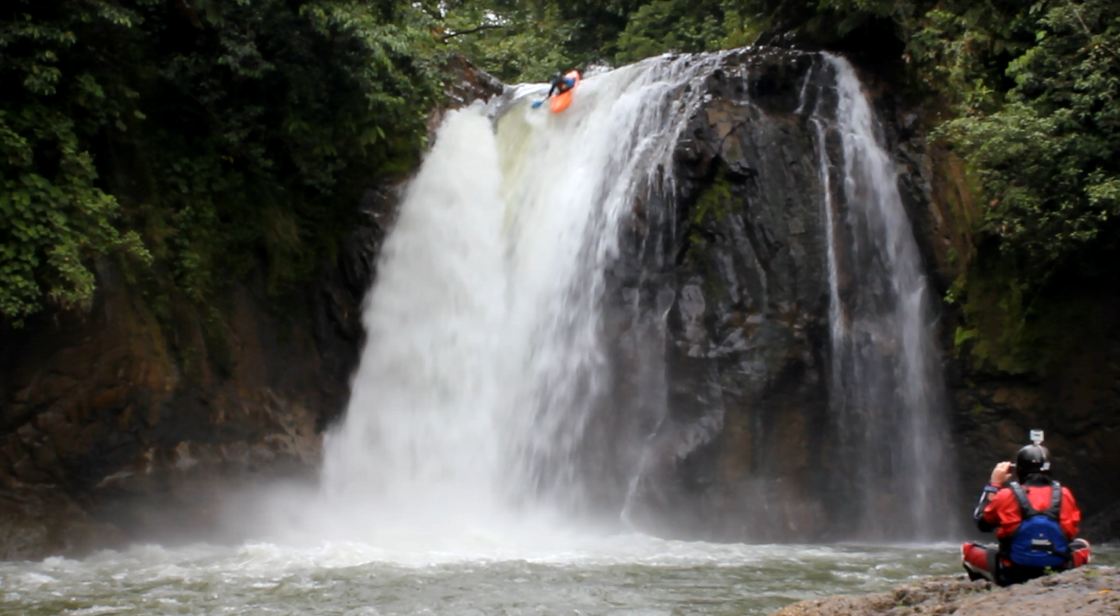 Today was the day we decided to run the 50 footer on the upper Hollin. John and I didn’t sleep much that night but were quietly shitting ourselves for this fall. We got there after heavy rain that night thinking it was too high, we were wrong, it was perfect. John and I were dropped off at the top and left to do th deed. A slightly tricky entry with all the river, from the lip of the fall pushing into the wall, a charge left of centre was needed avoiding a small kicker to plug her! John went first, took a sweet line rolled up at the base and paddled hard to avoid the siv rapid directly down stream of the falls small pool. Nathan next, stickin’ it left of centre has a super soft landing but snapped his spare blades! Two werners in a week, putting the one remaining blade through it’s paces I roll up and paddle hard to the bank, not wanting to drop into the next papid with on blade. Celebration! We had done it, beers at the take-out, the Ecuadorian’s love it and so do we! 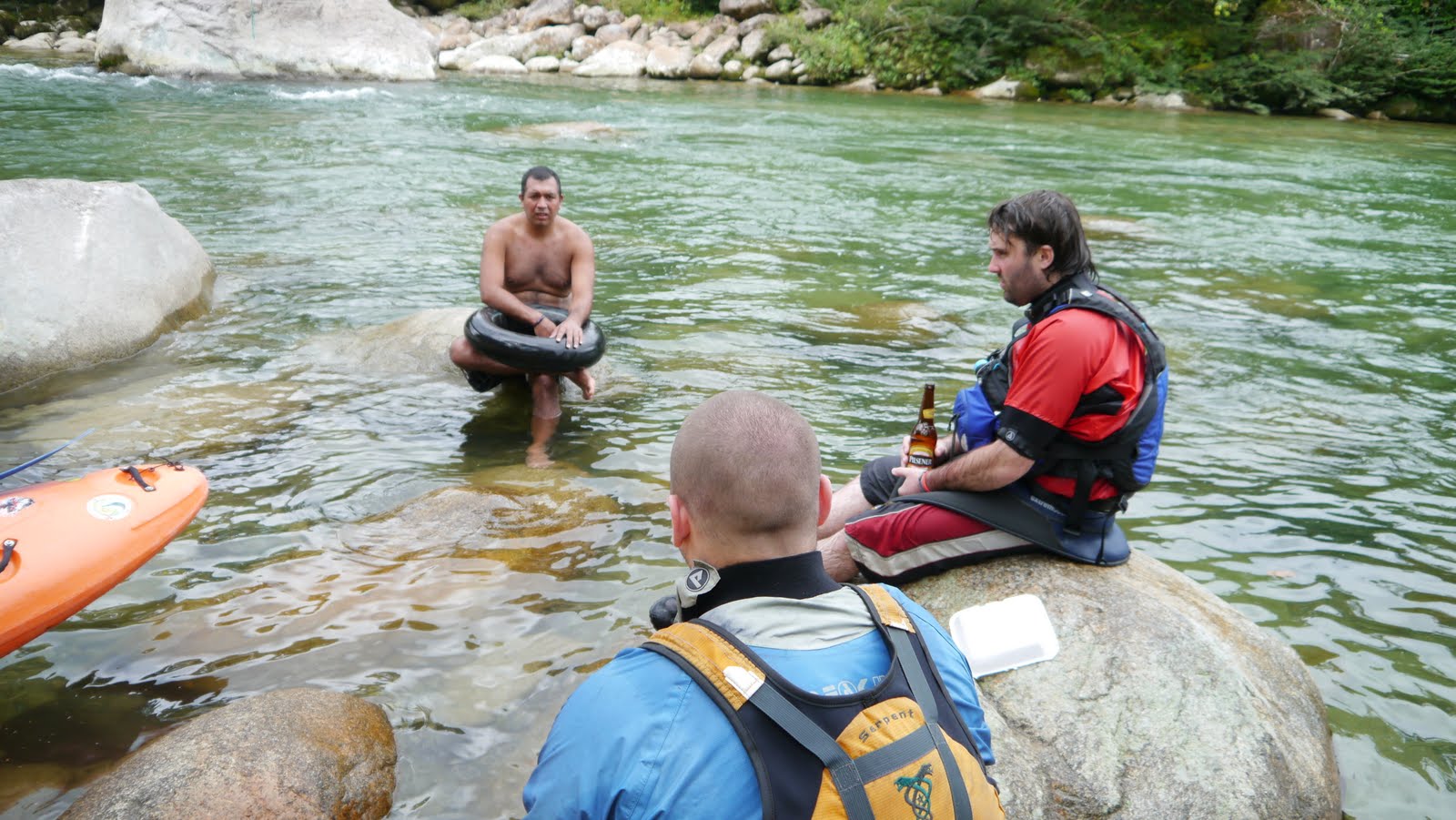 The rivers are awesome from cristal clear creeks, big falls to big volume, it seems so far, Ecuador has it all.