I wanted to take a week before I wrote this, to gain some perspective, but last Saturday I barely survived a classic leg entrapment on my local run, my comfort river, on a Grade 3+ feature. Here is what happened. 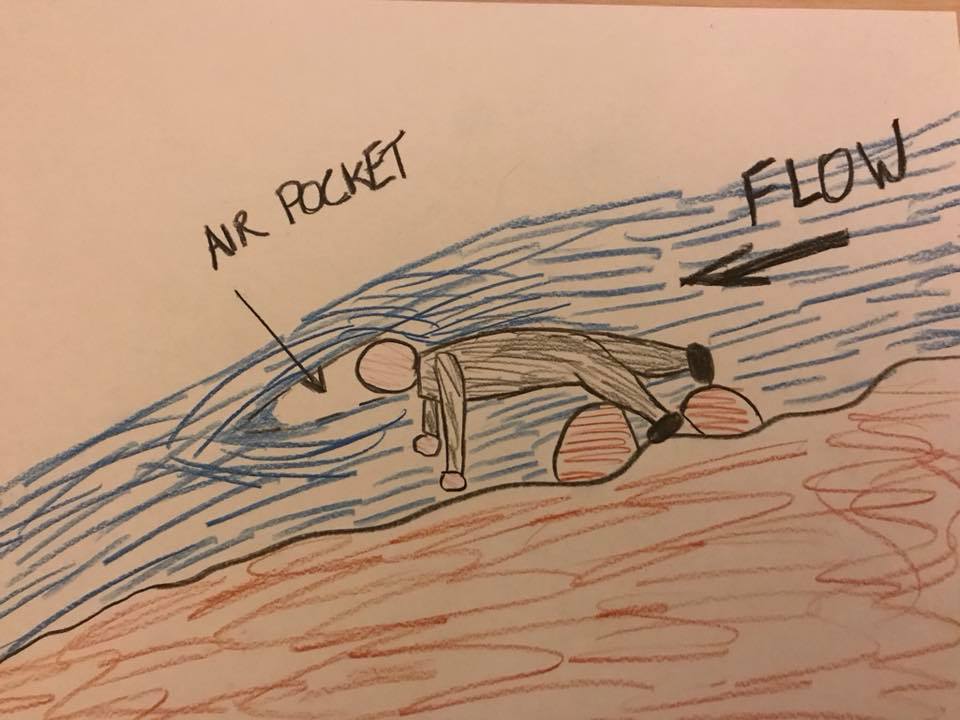 I’ve been paddling white water for 6 years and intensely for the last 4. I’m competent and confident and I’ve probably run that feature 200 times, and I haven’t swum it in over a year. It’s not a feature that I’m nervous about – it’s an everyday feature of the river for me and last Saturday I had run it 4 times before the entrapment happened on the 5th.

I’d been out with several groups of friends on the day and 5 or 6 of us set off together on that 5th run. I was pushing things, testing my new boat, and was having a great day. At the top of the feature I got a move wrong, ended in a stopper sideways and got flipped out of the boat. I pushed out of the boat ahead of a notoriously manky swim..

I felt my foot entrap and in a heartbeat was flipped over like a rag doll to the position in the sketch above. I imagined that my arse was out of the water and I was an inch or so below the surface, clearly visible. I was actually close to the river bed several feet below. The pain in my leg, pinned against the rock, was excruciating which caused me to throw up in the water almost instantly.

However, then I realised the force of the water flowing over me had created a massive air pocket, a void the width of my shoulders, and a jet stream of water coursing around me which moved if I moved my head. There was no water on my face or splashing – I could open my mouth and eyes. Surreal. I found that I could breathe deeply and calmly and think clearly about what was happening. I was in terrible pain in my leg but I think adrenalin kicked in and I went from sheer panic to a very calm state. I think we have some form of super strength or focus to allow that to happen – self preservation perhaps.

My foot was trapped but my knee was hyperextended in the wrong direction. I knew that my leg would snap easily if I forced it, but I could rationalise that breaking my leg would not have helped (it wouldn’t have freed my foot). However, it a huge amount of energy to lock my arms out in a press up position on the river bed; against the force of the water, this is all I could do to keep the weight off my knee. I had to keep thinking ‘they’re coming – wait – breathe’.

I still thought that I was fully visible and someone would quickly and easily be able to pull me out. Meantime, the reality was that my good paddler friend Sonia had watched it unfold and had seen exactly where I’d gone under. She shouted Bobby who was in an eddy upstream. I was lucky that there were two paddlers upstream at the point. To their horror, as they set up to do a rescue, I was totally invisible (white helmet, blue/black BA). They couldn’t even make out a body shape through the aerated water.

I’d actually ended up a meter from the edge – between them using slings, etc, they’d got into a position where Bobby could reach me, and I was freed. We don’t know whether he dislodged a boulder, pulled me out, or I relaxed enough to come free, but knowing that Bobby was there was a massive lift and suddenly I’m thrown out downstream and into an eddy. It wasn’t textbook and it happened very quickly.

I was 2’ under water, totally invisible and I’d been underwater for some minutes. Sonia and Bobby did not know that I had a pocket of air to allow me to breathe. From my rescuers perspective I can’t imagine how terrifying it must’ve been to pull out a fellow paddler and friend. It couldn’t have looked like a good outcome at that stage.

I was dragged out to a picnic bench and a crowd of people. I felt huge relief but looking at Bobby and Sonia’s faces brought it home – I think I changed state again then and the horror of it hit me hard.

I am so grateful to so many; Bobby and Sonia of course but also Dave Kohns Hollins a coach working the river that day who checked me over and gave me first aid. Other people collected my kit, Dave got me back to the van, etc. The raft guides, centre staff, the minibus driver – I felt so much love and professional care from all of them – I’m blown away by their incredible help and support.

So, nothing broken but lots of deep tissue damage to my lower leg and knee – it remains to be seen how and when I can back on the river.

This highlights how vulnerable to the river we are as paddlers. I was perhaps complacent in knowing the river so well. We were a group of experienced paddlers with all the right kit and we all had done our safety and rescue courses. It just isn’t like the text book; the force of the water, the speed that it goes from fun to life and death, meant everything was different. I was so lucky to have two very experienced and alert paddlers upstream who understood the seriousness and took drastic actions quickly. Those of us there on the day felt that we wanted to share this experience more broadly, within the paddling community.

A sobering experience which I’ll reflect on as my leg heals, but with hindsight I’ve been very lucky. What if I hadn’t had an air pocket, if I’d been the last person on the run; on busier days there would have been more white water rafts which could have paddled straight over me; I was lucky too that England were playing and the river was quiet. Thank you from me and my family to everyone involved.

There’s lots of if’s and but’s here including the need for a bomb-proof roll. In this case the roll could’ve prevented it happening because it was an on-side move, but that wasn’t how it played out. The roll doesn’t work in every scenario. Similarly, Bob couldn’t attach a line to me – in this case a cow-tail (no longer used) may have made a big difference.

For me, the river’s engrained in my DNA – this won’t stop me boating, but it will make me stronger and help me to keep learning as a paddler.