Recently I acquired one of Go Pro’s new additions to their line-up, the Go Pro Hero. Breaking the trend of recent years of developing top of the range action cameras, Go Pro rather quietly announced that they were bringing this little camera as a new budget option for those of us who don’t want to pay up for the new Hero 4. And at £99, I’m really impressed with it!

Before I decided to go for the Go Pro Hero I had a dilemma on the camera front. I didn’t really feel that I wanted one of the top range cameras for a couple of reasons:

• I’d never used one before, would I really like it or use it that much?
• I’m not a pro film maker so did I really need a top range camera?
• If I did pay for one, would I really use it to its full potential for fear of losing the thing, something that is fairly common with kayaking?

I’d had a little look around at some of the budget cameras that have been appearing such as the SJ4000 which was recommended by people in forums but I wasn’t entirely convinced by them. I had no idea who many of these companies that made them were and little idea as to how reliable either the camera or their customer services would be. This is where the Go Pro Hero has come to the aid of people in a similar situation to me.

At £99 its affordable while still providing good enough quality for an amateur film maker such as myself. The camera comes with the standard Go Pro features such as 1080p at 30 FPS and 720p at 60 FPS and 30 FPS, photos at slightly lower 5MP and low light and super view modes.

Still taken from video footage filmed at 1080p at 30 FPS

It does lack the wide range of options that the new Hero 4 offers such as 4K, 2.7K and 1440p shooting modes but unless you are an advanced film maker you shouldn’t miss these settings too much, as 720p or 1080p will cater for most stuff. It doesn’t have the best quality for photos but the ones that I have taken have still come out looking OK.

The Hero is also quite simple to use once you’ve had a little play with it. The menu is surprisingly easy to navigate and it is simple enough to find the options that you want. Again, this is a benefit of having fewer features on it. Even reading through the features of the Hero 4 on Go Pro’s website confused me at a glance!

At the level of video filming that I am at I just want to point and play with a couple of settings to play around with, nothing too fancy and complicated. This makes the Hero perfect for me as a first visit to the world of action cameras.

One feature that is particularly helpful when on the water is the beeps that the camera makes when it is turned on, off and when it is in time-lapse mode. Even with the noise of a river, it is still possible to make out the beeps allowing you to easily tell which mode the camera is in when the camera is set to quick capture mode (where the camera hibernates between takes). This makes operating the Hero while still on your helmet much easier.

Possibly the only thing that the Hero really lacks in video quality is any stabilisation features. I’ve seen a couple of reviews of this GoPro Hero camera by people on dry land and they have heavily criticised this camera for that. However on the water I don’t find that this is too much of a problem.

When on flat water, providing you don’t shake your head around the footage is steady. At the opposite end, when you’re getting thrown about on rough stuff, I would question how much image stabilisation can really help.

The battery life is also quite impressive for such a small camera. Go Pro estimate that at 1080p the camera will record for 2 hours and 45 minutes. I’ve found that the outings that I’ve been on where the camera has been on for interesting bits then turned off/set it to hibernate, it will more than comfortably last an entire paddling day.

Photo taken at the highest setting of 5MP

There are a couple of other significant differences between the Hero and the top range versions. Unlike the newer models the GoPro Hero doesn’t come with WIFI connection or a screen at the back. These features are more for advanced uses of a Go Pro and using the camera to film yourself going down a river will rarely require such features.

As well as this, if a 32Gb SD card is used with the camera, it will be unlikely that you will have to sort through any of the footage on the camera as it is more than likely that the camera will run out of power before the memory is all used up.

This is possibly the only real negative that this camera can be faulted for, but at the end of the day it is reasonably cheap for an action camera, so if it was to break then providing you’ve had plenty of use out of it, it’s not as bigger tear jerker as losing a £170 – £400 camera. 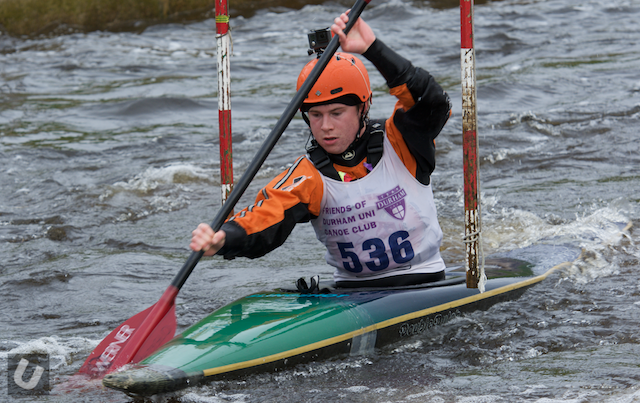 For kayaking the Hero is a is great value for money for the kayaker who is either new to film making or just wants a bit of footage for fun. Compared to the other Go Pro cameras it’s relatively inexpensive yet it still produces very good quality footage. Yes you can see where the costs have been cut in terms of features and the case design but the benefits of this camera more than make up for this.