GoPro have just launched the new GoPro Hero. It takes on the same form factor as the Hero 5 and Hero 6 and if you didn’t take a closer look at the labelling you probably wouldn’t even notice it was a different camera. 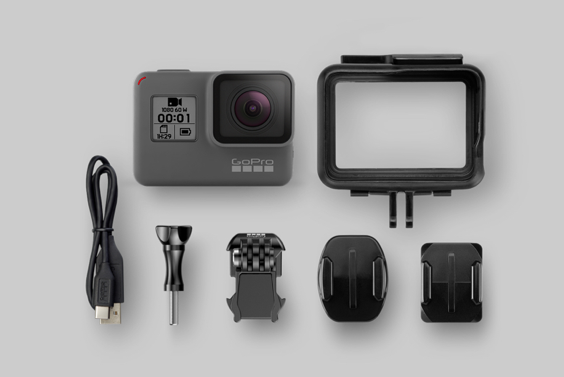 The GoPro Hero has a 10MP camera with the ability to take 10fps in a burst. Photo time lapse is possible but is limited to an interval of 0.5 secs.It can shoot 1440p and 1080p video at 60fps. It has the same touch screen as the Hero 5 and 6 is waterproof to 10m without an additional case and is voice control enabled.

It has the video stabilisation capability from the Hero 5, but doesn’t have the exposure control or protune capability. For those who would want to use the GoPro Hero for vlogging there is no way of using an external mic.

Weight is a shade lighter (2g) than its older brothers at 115g.

GoPro have updated there site and the Session/Session 5 are now gone. This leaves the line up as the Hero 5, Hero 6, Hero and the 360 degree Fusion.

How does the Hero (2018) compare to the other GoPro cameras?